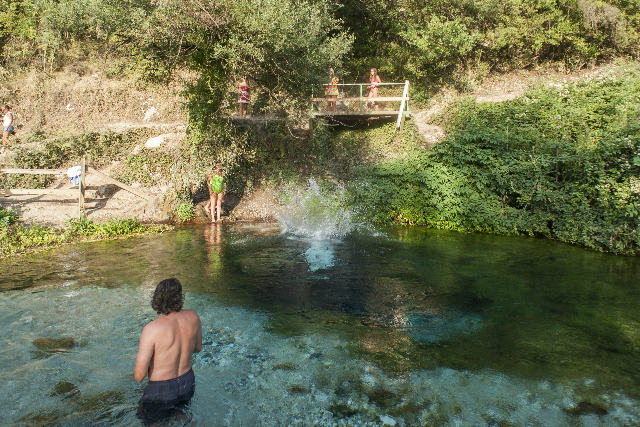 The Great Balkan Ride may have been almost drawing to a close, but the seventh day provided some of the best memories of the entire event. We began at the seaside of Vlorë, drove the dramatic coastal route to Sarandë, before cooling off in the fantastic “Blue Eye”. Avoiding encroaching wild fires, we ended up in Gjirokastra, “City of Stone”, one of Albania’s most picturesque towns.

We woke up in Vlorë, looking out across the Southern Adriatic. There was time for a relaxed breakfast by the sea, or even to take a dip, joining the locals on the stony shore.

We then set off on one of the best drives of the trip. It wasn’t difficult, like our earlier days in the Albanian mountains, but the views were just as spectacular. Winding along the coastal from Vlorë down to Sarandë, we passed many stopped local cars whose engines couldn’t handle the steep inclines on such a hot day.

We stopped for lunch in Sarandë, yet another ancient city, and one especially famous for its stunning blue water. Afterwards we headed towards our next destination, the “Blue Eye”, but had to be careful to avoid forest fires which were at the time ravaging Albania. One team had the nerve-wracking experience of following a oil tanker as they drove through heavy smoke.

The Blue Eye (Syri i Kaltër in Albanian) is an incredible natural spring, over 50 metres deep, continually shooting water up to the surface. The water is consistently around 10 degrees Celsius, even on roasting summer days in August. Naturally, the local authorities want to keep this natural attraction undisturbed: but this sign clearly didn’t stop anyone!

Our gang of adventures were keen to show off their bravery by jumping in; pictured above, Rob is showcasing his diving prowess. Even more impressively, 75 year-old Tony also jumped in, to the delight (indeed, applause!) of onlookers, who noted he was by far the oldest diver they’d even seen there. The force of the stream pushed him slightly down the river, but locals were only too happy to help out the conquering hero.

Our final stop for the day was Gjirokastër, a picturesque town set amid the mountains, and known as the “City of Stone”. As the birthplace of former dictator Enver Hoxha, the historic town escaped the communist modernisation that befell many other Albanian cities. Thus, it is still a pleasure to wander around the Ottoman-style town, a UNESCO world heritage site. After the exertions at the Blue Eye, we took the opportunity to sit in the center and enjoy well-deserved beer(s).