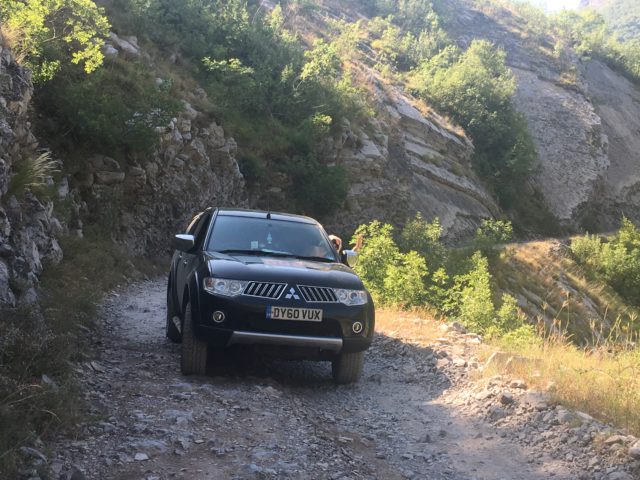 We interview Rob and Amy about the Great Balkan Ride 2017.

At the end of the Great Balkan Ride, in fact during dinner in Thessaloniki, we interviewed some of the teams about their experience of the event, and their thoughts on the Balkans generally. The first team were Rob & Amy. Rob is a Travel Scientists veteran, who won last year’s Caucasian Challenge, while this was Amy’s first event.

What did you expect and how did it surprise you?

Rob: It was everything I expected really (laughs). New countries, new experiences, following on from the Caucasian Challenge last year  it was really good, really enjoyed it.

Amy: I enjoyed the fact that I was visiting new places and because you’ve got your own car you can go at your own pace. Really exciting, really good.

What was your favourite place?

Amy: I liked the village in the hillside, Theth. I think that was my favourite place, and also the off-riding experience with Rob was the best for me, because I trust him as a driver. I don’t think I would have enjoyed it so much if I’d been with a driver I didn’t trust. Yeah, that was definitely the best.

Rob: Yeah, that was my favourite day as well, really enjoyed it. It was not off-roading, it was like rock-climbing in a car. Really testing the car, and the scenery was absolutely gorgeous. We really enjoyed it.

Favourite “Only in the Balkans” Experience?

Amy: I liked swimming in the Black Lake, I thought that was really nice. And I also enjoyed the fact that when we went off-roading we found a stream under a bridge, and we could just stop the vehicle and go wild-swimming there. Which was better than the Blue Eye swimming which was, you know, a big tourist attraction.

Rob: The longest zip-wire in Europe [near Žabljak, in Montenengro] was ace. Fantastic, I recommend it.

Did you jump in the Blue Eye?

Anything about the event you would change?

Rob: I’d rather it was all four-wheel drive, actually. And I heard there will be more in future, which I think is a great idea.

Amy: You know, I wasn’t really a four-wheel drive / off-road kind of person before this but the best day for me was when we went off-road and if we had more off-road experiences I think it would’ve made the trip even better.

So this trip turned you into an off-road fan?

Amy: Yes, well I wouldn’t want to drive it myself, but with Rob at the helm it’s fine!