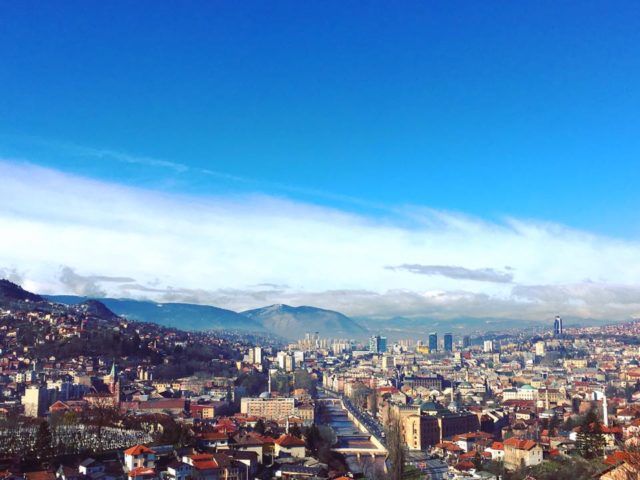 Kino Bosna is probably our favourite spot in Bosnia!

The Great Balkan Ride adventure rally begins in Sarajevo, the capital city of Bosnia. There are so many things to do in the city, from seeing museums to trying the country’s incredible food. However, before we set off and explore the beauty of Bosnia, there’s another essential place to visit: Kino Bosna, an authentic bar in a former cinema, which is home to raucous evenings of live music and cheap drinks.

The 1st of May Cinema

Kino Prvi Maj (the 1st of May Cinema) was for many decades one of Sarajevo’s most popular cinemas. It even managed to continue functioning, at least partially, while the city was under siege in the 1990s, and only closed for good in 1997. However, after it was shut down, one of the cinema’s former employees, known as Sena, saw potential in the venue. She decided to reopen it as a bar and cultural venue. Originally the rows of cinema seats remained, but they have since been replaced by more traditional tables, though old movie posters still line the walls.

In the years since, there have been attempts to utilize the space for film screenings, but it’s as a bar that Kino Bosna has become famous again. What makes the venue so special is that visiting feels like attending a special celebration, where everyone knows each other but visitors are still welcome. For reasons that are unclear, the biggest night is Monday, though Thursday is also popular. On these nights the hall becomes packed with all sorts of people — students, pensioners, even the occasional foreigner — while Sena strolls the room saying hello to regulars. One warning: it’s incredibly smoky, but that’s the price for authenticity…

We’ve saved the best till last. On Monday’s and Thursdays, free entertainment is provided by a traditional band. They play Balkan folk songs which all of the locals will know, and for the classics half the room will be singing along too. You can get familiar with some of the best ones before you go, but it’s fun enough just to enjoy the atmosphere. If you can make it to Kino Bosna on a Monday you won’t regret it, we promise. It might also be a good idea to find a local who can help you reserve a table. It lasts late into the night, but it also fills up early!