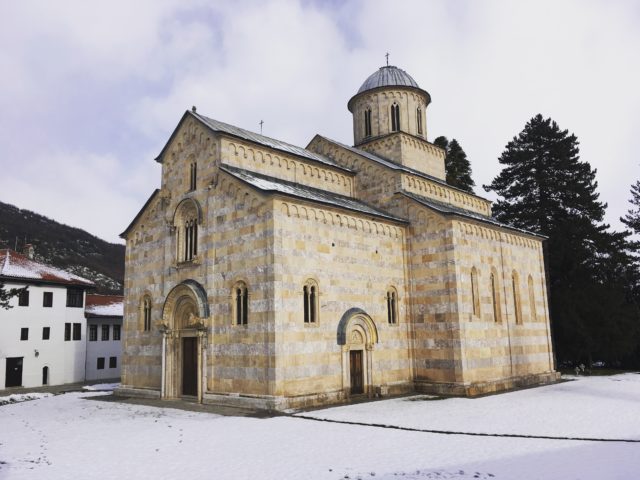 The frescoes at Dečani Monastery are unmissable.

On the Great Balkan Ride, we spend one night in Kosovo and, despite the briefness of our stay, the young country easily manages to defy expectations. One of the most memorable moments is visiting Dečani monastery: this 14th century masterpiece is as stunning as it is controversial. You many never see such an incredible church interior, but to see it you’ll have to hand over your passport. While it was a bit of a dangerous place to visit not long ago, now it’s safe, and a recommended excursion for all our participants!

Since Kosovo broke free from Yugoslavia in 1999 (officially declaring independence in 2008) the status of Serbian monuments on the territory has been understandably problematic. While many ethnic Serbs fled the country or gathered in specific enclaves, Dečani Monastery, close to the Albanian-dominated town of Deçan, is obviously unmovable. A powerful symbol for Serbians throughout the centuries, the monastery has been under constant protection by KFOR (NATO) forces for eighteen years. Despite that, there have still been five major attacks, with more than nineteen grenades hitting the monastery and surrounding grounds.

Dečani isn’t merely important for its symbolic importance, however. In fact, the controversial nature of the monastery tends to overshadow the astonishing beauty of its interior. Photography (in any case, forbidden inside the monastery) cannot convey the remarkable condition of the centuries-old art, which stands comparison with grand churches of Rome. Begun in 1327 and completed in 1335, Dečani was built during the reign of King Stefan Dečanski and his son Stefan Dušan, when Serbia had a large empire in South-Eastern Europe. While Serbia was conquered by the Ottomans a century later, the monastery was permitted to remain in operation, and it was in the following centuries that the most impressive art filled the walls of Dečani. While Austrians looted valuable jewels in the early 20th century, the artwork, comprised of over 1000 compositions, remains intact.

Tensions in Kosovo have decreased recently, and the monastery has been open to visitors for several years. It’s an easy drive from our hotel in Peja, and there’s space to park, though your car might be checked for weapons! While armed soldiers demand passports upon entrance, the grounds themselves are an oasis of calm. Helpful guides offer free tours and better yet, at least on quiet days, offer free shots of rakia to guests. Being served strong spirit by a monk is an experience not to be missed.