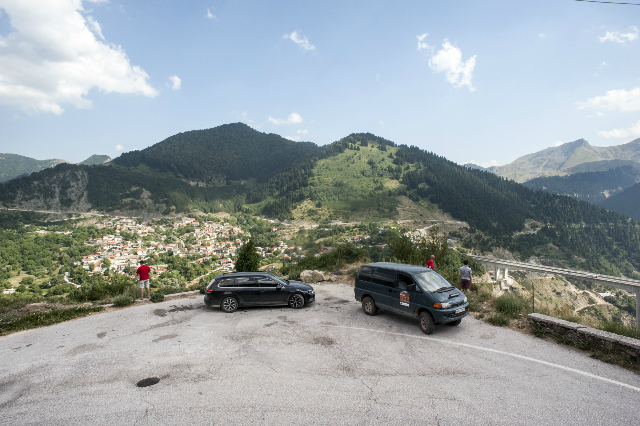 A memorable last day of the Great Balkan Ride 2017.

The final day of the Great Balkan Ride was eventful, as we squeezed in sightseeing, another border, and a fantastic final meal. We departed the picturesque City of Stone and travelled through (very underrated) Northern Greece, on our way to one of the coolest cities in Europe: Thessaloniki. It was a great ending to a very successful event, and we can’t wait till the 2018 edition!

When we had arrived in Gjirokastër the previous night, it had been so warm that cold beers took precedence, and any thoughts of tourism were relegated to the back of our minds. However, after breakfast on the top floor of our hotel which overlooked the picturesque town, a little exploration became irresistible. So, we headed to the castle, which offered even more sensational views (including of distant forests destroyed overnight by fire) and featured a military museum with an impressive collection of weapons, new and old. We’re fairly certain visitors weren’t supposed to pick the weapons up as props for our photos, but that’s exactly what we did.

We couldn’t stay too long, though, as we had a border to cross, and wanted to get to Thessaloniki in time for the evening’s festivities. Luckily, the border was one of the smoothest (ie quickest) of our trip. This meant we had time for a relaxed lunch in the little town of Metsovo (no, we hadn’t heard of it either), amid green valleys dotted with white houses. It’s in this part of Greece that you realise how ‘Balkan’ the country is, quite unlike its Southern and Island territory. However, some things had changed once we crossed the border: the food was better and the roads were smoother!

The second city of Greece, Thessaloniki has long been a cultural hub for the Balkans, even after the destructive fire of 1917 rid the center of some of its historic charm. Nowadays its home to wide boulevards, spacious public squares, and modern buildings. There is an undeniable buzz to the city, as packed cafes and ancient arches fight for your attention. We settled down for a beer, overlooking the bay. We’d come a long way, from meeting in Sarajevo to drinking in Kosovo, with drama in the Albanian mountains and relaxation on the Albanian Coast and it was time to reminisce.

The End of the Balkan Ride!

We celebrated the end of the Great Balkan Ride 2017 with a dinner at the traditional Ouzou Melathron restaurant, where they’d saved us an outside table, right across the street from live music. The food, for which Thessaloniki is famous, may have been the best of our trip and the drink was certainly some of the strongest. Tony (a veteran of Travel Scientists‘ events) made a nice speech, thanking Huba for leading the rally, and everyone else for being such great participants. Toasts were made and medals were handed out. Some said their goodbyes after dinner but, of course, the night didn’t end there: for some there was no choice but to visit some of Thessaloniki’s famously lively bars, especially after the Danes began rolling their famous dice…