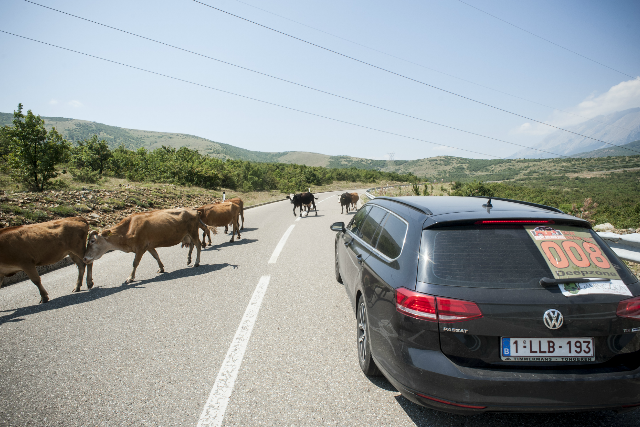 From Peja to Shkodër, on Day 3 teams left Kosovo and made their way to beautiful Albania.

Day 3 of the Great Balkan Ride 2017 began understandably slowly, after Day 2 had ended with a late night out drinking rakia of the lively boulevard of Peja. Once teams had recovered enough to drive, it was time to leave Kosovo and cross the mountains into Albania.

Some more diligent teams took the opportunity for a last spot of sightseeing in Kosovo, by visiting the historic Visoki Dečani monastery. Constructed in the early 14th century, this Serbian Orthodox church is filled with incredible frescoes. Due to the political situation, it has to be constantly guarded to prevent vandalism.

We passed the border with ease, and were soon on Albania’s winding mountain roads. If anything, the area was more developed than we might have expected: the roads were smooth, and we looked down upon a vast system of concrete dams and reservoirs. Several teams stopped at the charming Alpine Hotel for lunch, with its unique interior decoration and large fish-tanks (from which diners could pick their meal).

Appropriately Named Town of the Day

Before we reached Shkodër, our eventual destination for the day, we passed the town of Puke. As demonstrated above, this would’ve been a great photo opportunity at the best of times. But after the previous night’s drinking, it seemed a little like our latest destination was taunting us.

It wasn’t a long day, and all teams were glad to relax at the Havana Hotel, with a glorious pool and eager-to-please staff. It was the perfect place to relax before Day 4’s trip to the mountain of Theth, which would prove a testing journey!