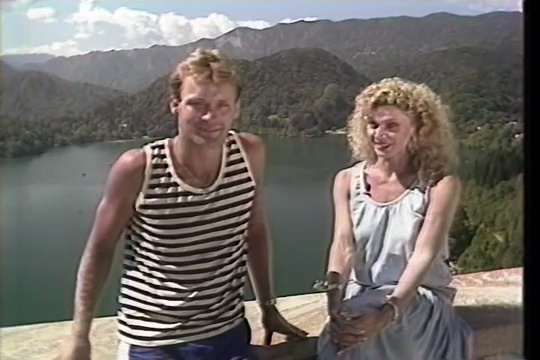 The Great Balkan Ride visits places that are, compared to much of Europe, undiscovered treasures. And while nowadays people, our participants included, are coming to appreciate the attractions of the Balkan region, it was even less appreciated in 1986. That was when the American TV series “2 on the town” visited, and the film is fascinating to watch today.

Entitled “Yugoslavia: Europe’s Hidden Treasure”, the host Melody Rogers tours some of the most famous highlights of the country that would disintegrate only five years later. She explains to her American audience that Yugoslavia is nothing like the grey Soviet regime they might have imagined it to be. The footage is dated, as are the innuendos and the willingness of the cameramen to linger on sunbathing locals. However, it’s fascinating to see what life was like in a a country that no longer exists.

Comprised of what are now Slovenia, Croatia, Serbia, Kosovo, Bosnia, Montenegro, and Macedonia, Yugoslavia was blessed with rich diversity in culture and landscape. The film begins in the North-West of the country, at gorgeous Lake Bled (now in Slovenia), pictured above. You can see the mesmerizing waterfalls of Plitvice Lakes, in Croatia, and the historic coastal cities of Split and Dubrovnik. While the Great Balkan Ride doesn’t visit all these places, they are very accessible (and highly recommended) for stopping off en-route to the starting line.

Nowhere was the tragedy of Yugoslavia’s destruction felt more than Bosnia, which also features prominently in the film (and provides the starting point for the Great Balkan Ride). In Sarajevo, described as “Yugoslavia in miniature”, the host praises the unique multiculturalism, whereby four major religions co-existed in close quarters. This was a triumph of Yugoslavia, and of course a factor in what led Sarajevo to suffer so harshly in the subsequent wars. We also see footage of locals diving off the old bridge in Mostar, which was destroyed only 7 years later.

While the film is remarkable as an nostalgic artifact, much of what is described remains true today. The host was clearly very impressed by the beauty of the country, the quality of the food, and the warmth of the hospitality. Even though the country is now many, the Balkans still have the power to surprise: the people are just as friendly, the landscapes still as remarkable, and the food remains incredibly filling!